Find us on Social Media

We would love to hear from you! So give us a shout with any question, comment or request. We receive a great deal of email, so please be patient if it takes time to see a response. Customer service inquiries regarding project plans and product sales will receive priority.

Tool review or advertising inquiries should also use this form.

Who is James Hamilton?

He’s the producer of one of the longest running woodworking channels on YouTube (since 2011), and the editor of Stumpy Nubs Woodworking Journal with over half a million subscribers and nearly a million monthly individual viewers.

In 2017 James received The Woodworking Network’s “40 under 40 Award”, given to innovators in the craft. In 2015 he was thrilled to present alongside Roy Underhill in Kansas City. In 2019 he developed and filmed a table saw course on the set of PBS’ The Woodsmith Shop and over the years he’s written and produced commercials to air during The Highland Woodworker.

What began as a joke became a brand!

“Let’s choose a name no woodworker would forget.” That was the concept behind the creation of “Stumpy Nubs”, a character in an online woodworking show called Blue Collar Woodworking, launched on YouTube in 2011. It may not seem like long ago, but back then there were few YouTube channels dedicated exclusively to woodworking. Most that did exist were made up of short, specific videos or “vlogs.” Blue Collar Woodworking was something completely different- a woodworking variety show. Each episode featured a central project, complimented by a selection of recurring segments including “Stumpy’s Safety Tips,” “Tools Stumpy Uses,” “Ask Stumpy,” “Things to Think About While the Glue Dries” and others. Viewers were invited into the fictional “Stumpy Nubs Workshop” where Stumpy struggled to run a business while managing a team of imagined helpers. Besides for Stumpy only two other characters were ever seen on film (Mustache Mike and Chip McDowel). But the exploits of Randy, Joy, the Bunion Brothers and Old Man Rabishaw (all loosely based upon real people) were interwoven throughout each episode by means of various updates between segments. Blue Collar Woodworking enjoyed a loyal cult following and attracted our first major sponsors. Even today we receive frequent requests for the show’s return, as well as spinoffs  “Mustache Mike’s Corner” and “Old-Timey Woodworking”. 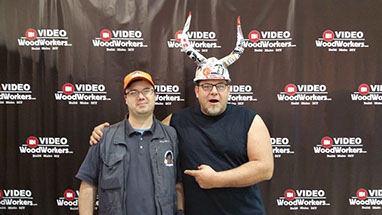 Posing for photos with friends and fans at The Woodworking Shows, Atlanta 2016

While “Stumpy Nubs” began as a character on a woodworking variety show, the name stuck. As predicted, people remember a woodworker with a name like that. So real-life woodworker and “Stumpy Nubs” creator, James Hamilton held onto his YouTube handle. Truth be told, it’s not his favorite name in the world. James is very happy being called “Jim”. But tens of thousands of woodworkers call him Stumpy, and he’s decided to embrace it as a way to draw attention to workshop safety. (Nobody wants to end up with stumpy nubs!)

What is Stumpy Nubs Woodworking Journal? 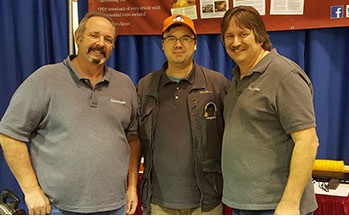 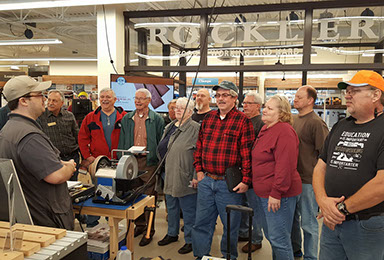 Fans coming to meet, have books signed by “Stumpy Nubs” at a Rockler store openings, 2017

In addition to publishing Stumpy Nubs Woodworking Journal, we also produce well over 100 woodworking videos each year including comprehensive tutorials and short woodworking lessons. Each year we also produce eight episodes of our very popular Cool Tools series, featuring reviews of woodworking products we believe our audience will benefit from.

We partner with a family of 25 brands that support our efforts and enjoy the patronage of our loyal viewers and readers. We carefully chose these sponsors, building long-term partnerships only with those we believe our audience can trust. Because of this careful selection process we have never seen a sponsor leave us in our decade on YouTube!

If you have a product that you think our audience will benefit from, please contact us. Please be aware that we turn down more products than we accept for review. Top quality is a must!

If you wish to inquire about joining our family of partners or to receive a media kit, including our current web and subscriber stats, testimonials from current sponsors, and ideas about how we may work together, please request one using the form above.

A truly unique digital publication for the everyday woodworker

As an Amazon Associate I earn from qualifying purchases.

Mobile version: Enabled
Back to top

Use the search box to find the product you are looking for.

No products in the cart.